How to Manage Fleet Speeding Without Speed Governors

What is a Speed Governor?

A speed governor is a device that is to regulate and limit the top speed of a vehicle. Speed governors control the speed of an engine based on load requirements providing automatic limitation of speed. The speed governor device regulates injected fuel quantity to the engine to correspond with speed and load.

While effective in limiting engine speed, speed governors can create engine issues and do not fully prevent speeding because they only impose maximum speeds with no context to posted speed limits. Commercial vehicle fleets consider speed governor removal for various reasons, including improving vehicle performance and increased level of fuel economy. With that said, speed governors or fleet speed limiters are often implemented by fleet managers in risk management processes.

The Importance of Speed Management in Fleet Driver Safety

One of the clearest indicators of risky driving is speeding. From a fleet safety technology point of view, managing this capability is commonly referred to as “speed by street” management since a comparison is made between the speed of the vehicle and the actual posted speed limit of the street the driver is driving on.

Excessive speeding contributes to a myriad of exposures to risk. Someone speeding has less time to react to driving situations. It takes them longer to stop, other drivers may not be anticipating them to be driving excessively fast and unintentionally make riskier adjustments around them. Speeders take longer distance and time to react to danger. Driving behavior data shows that speeders are generally more aggressive in other driving behaviors as well. Aggressive driving behavior and speeding go hand in hand. Speeding gives the driver less time and space to react to any driving situation. Speeding accidents also typically involve at-fault collisions with the vehicle in front of the speeder—in which case the speeder is almost always found to be at fault. Safe driving behaviors including driving a slower speed will ultimately be safer as streets are speed rated to allow drivers to drive what is considered to be a safe stopping distance. At posted speed limits, the attentive driver will typically have adequate time to react to unforeseen driving challenges.

Managing Speeding with the Cell Phone vs. Speed Governors

While there is clearly a broad spectrum of potential speed technology solutions such as speed governors and speed limiters aimed at identifying and correcting risky driving behavior, one of the approaches that is highly effective is also one that is the lowest cost and simplest to deploy. Audible speeding alerts delivered through the mobile device allows for speed governor removal in a commercial vehicle.

Think of the ubiquitous cell phone, carried by virtually every driver of a commercial fleet vehicle. The smartphone, with no other hardware required in the vehicle, can be highly effective at correcting two driving behaviors most implicated in vehicle accidents. Insurance companies are especially motivated to find ways to improve driver behavior around phone distraction and speeding, given that phone distraction is one of the leading causes of crash frequency according to the National Safety Council and speeding is one of the leading causes of crash severity.

The good news is that speeding is a driving behavior that is actually very easy to improve once the problem is identified. It is usually the case that the driver is merely comfortable with driving with the habit of excess speed. If technology (or management) can tell the speeder to slow down, the results are usually clear and fairly immediate. There is little reason for the speeder to argue with the reporting of speed infractions since there is no subjectivity or sophisticated compensations that have to be made to accurately draw conclusions from the driving behavior data. Speed reporting is highly accurate and largely irrefutable. Absolute speed can be reported with good accuracy and speed limits are known for most streets.

Other driving behavior are not nearly so straight forward. For example, hard braking is often used as an important indicator of risk exposure. The challenge is that braking (like acceleration and cornering) is based on an analysis of change of momentum over time, either from accelerometer readings or a velocity change/time change calculation.

LifeSaver Mobile’s smartphone-based solution encourages a collaborative approach to fleet safety between the driver and the manager. The LifeSaver platform provides drivers with a couple opportunities to self-correct poor driving behavior before any coaching occurs. This proactive approach to fleet safety results in much less coaching by the fleet operator, which is obviously preferred by most fleets. Drivers using the LifeSaver app receive a 3-phased corrective path: 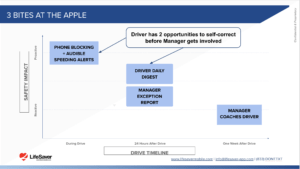 By using the ubiquitous cell phone, fleets can effectively manage two of the riskiest driving behaviors which also happen to be under the microscope of plaintiff attorneys these days.  Both excessive speeding and cell phone distraction can be significantly improved, without any required fleet vehicle speed limiter or speed governor device.  Both provide a large degree of self-correction by having the technology interact directly with the driver while the driver is misbehaving.  This makes the combination an attractive step in achieving driving safety, particularly with the solution deterring drivers looking for speed governor removal.  It is affordable for all fleets and is a solution that insurers can incentivize for their insured fleets and deliver across their entire book of business.

Fleets are clearly faced with the challenges of a hard insurance market, meaning insurance is harder to get and inevitably significantly more expensive.  Meanwhile, insurers continue to struggle with the reality of a non-profitable commercial auto market.  Both the fleet and the insurer can create a more favorable result by using or incentivizing the use of this type of safety technology, the end result of which will be less accidents.

You can find out more about which cookies we are using or switch them off in settings.

This website uses cookies so that we can provide you with the best user experience possible. Cookie information is stored in your browser and performs functions such as recognising you when you return to our website and helping our team to understand which sections of the website you find most interesting and useful.

Strictly Necessary Cookie should be enabled at all times so that we can save your preferences for cookie settings.

If you disable this cookie, we will not be able to save your preferences. This means that every time you visit this website you will need to enable or disable cookies again.