Fleet fuel efficiency is defined as “a measure of how much a vehicle will convert energy in fuel to kinetic energy to travel”. The opportunity for fleet fuel management is that driving at lower speeds, especially as speed exceeds 50 mph, will have a significant impact on fuel efficiency. 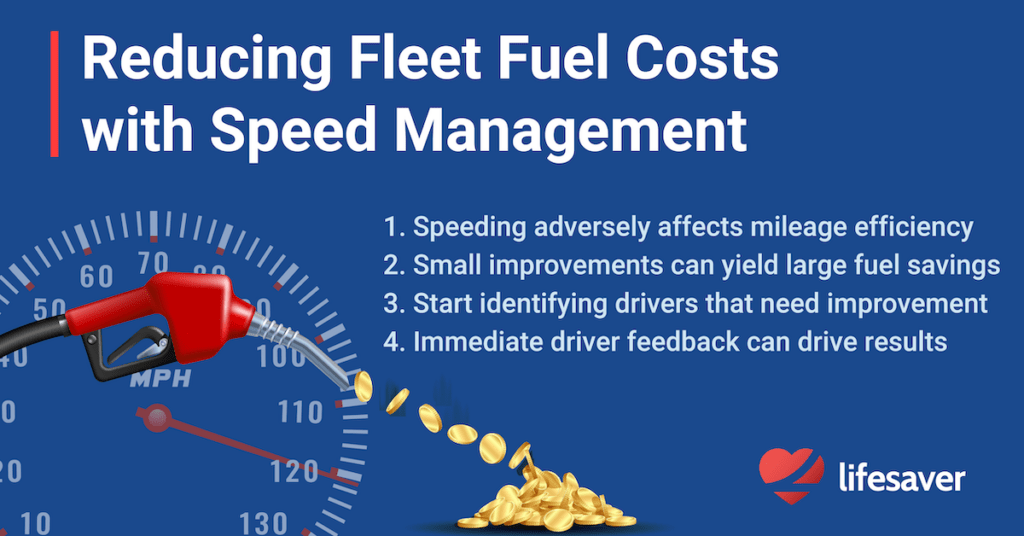 Beyond the basics of proper driver training, controlling and tracking fuel purchases, ensuring that commercial vehicles are used only for approved business purposes,vehicles (tires, engines) are well maintained, —perhaps the clearest opportunity for reducing fuel costs is through fleet speed management.

It is no secret that the impact of rising fuel prices has adversely affected profitability for virtually all commercial fleets. Fuel is the second leading cost of vehicle ownership, second only to depreciation.  According to Automotive Fleet Magazine, in terms of a fleet’s total operating expenses (“on the road variable costs”), fuel actually represents 60% of a fleet’s total operating expenses.

Even a small improvement in fleet fuel efficiency can yield significant savings. There are limitations in implementing speed management technology in terms of speed of delivery, driver resistance and impacted traffic issues. For example, it would become an issue if all trucks were forced to drive at a maximum speed, causing backups and frustrating other drivers trying to pass, so a balance in speed management and operational priorities must be sought. As one senior fleet manager recently noted, up to 30% of fuel economy is in your driver’s foot, which means that fleet managers should not overlook the importance of encouraging their drivers to drive at lower speeds as a key part of commercial fleet fuel management solutions.

How much does speeding impact fleet fuel efficiency?

Fleet speeding will directly affect gas mileage, thus raising operational costs.  Drivers lose 1-2% of their fuel efficiency for every mile per hour they drive over 55mph.  A pickup truck averaging 25 miles per gallon at 55mph will see its mileage decrease to 19.3 miles per gallon by driving 75mph. The behaviors that impact fuel efficiency are nicely summarized in this US News article.  In addition to speeding, aggressive acceleration as well as harsh braking and excessive idling are both related directly to lower fleet fuel efficiency.  As much as 20% more fuel is consumed when a vehicle’s speed suddenly changes.

This Fuel Economy Calculator can give you an idea of how much excessive speeding can adversely affect mileage efficiency and increase fleet fuel costs.  A simple example shows that a vehicle that gets 20 MPG, driving 50 miles per day, at a gas cost of $6 per gallon, will see fleet fuel costs jump from $5475 a year to $7602 per year by increasing speed from 55 to 80 mph. For a 100 vehicle fleet, this represents over $200,000 a year lost to excessive speeding.

What are the options to encourage my commercial drivers not to speed?

Driver training is a critical component of making commercial drivers aware of the necessity for managing speed to reduce fleet fuel costs as well as providing guidance for how to achieve improved mileage.

Beyond driver training, fleet managers can use technology to encourage lower speeds.  Fleets can choose to implement speed governors which provide a specific upper speed limit for the vehicle, not allowing it to travel faster. Speed governors can range in cost from sub-$50 for simple personal vehicles to several hundred dollars for more robust commercial solutions.

There are a number of speed management solutions such as video cameras, OBD/GPS devices, and smartphone apps, which can track commercial vehicle speed and even compare it to posted speed limits. The beginning point of improving speed is to effectively measure speed, thus being able to quantify improvements as well as identify those drivers most in need of improvement.

Fleet fuel savings can be mostly impacted by focusing on maximum speed warnings vs. posted speed warnings.  Measuring both types of speed infractions has value depending on the type of driving.  For longer duration trips at higher speeds, a speed governor limiting top speeds can help with reducing fleet fuel costs.  For shorter duration, non-freeway driving, measuring the speed driven against the posted speed presents opportunities for improving fleet fuel efficiency there as well.

There are differing degrees of notifications that technology can provide. They all provide periodic reports to the managers and some even provide the same reports to their drivers.  The key is to notify the drivers in real-time so they can slow down and save fuel. These solutions must provide immediate warnings to the driver in order to be effective.

The importance of immediacy in fleet speed management

It is very important to provide immediate results to drivers when they have speeding issues. If a driver receives reporting feedback, perhaps well after the speeding event, it will not have the impact it would have had if that speeding issue were brought to the driver’s attention as close to real-time as possible.  Ideally, the driver could receive a near-real time warning that the acceptable speed limit is being exceeded, whether it is based on a fixed rate of speed or determined in comparison to the posted speed limit. The longer the duration of time from the speeding behavior to providing feedback to the driver, the less impactful will be the improvement in speeding behaviors, and in turn will be less effective in helping reduce fleet fuel costs.

Even the driver notifications can differ, meaning they can be audio beeps (which tend to be ignored or can be vague in their meaning to the drivers) or verbal warnings and notifications, which intuitively are more effective in getting drivers to react. Taking this a step further, the verbal warnings and notifications can be even more effective if you allow the employer to customize the verbal messages, especially if that verbal message is the voice of someone like the CEO, fleet manager or safety director.

For the small percentage of drivers who do not improve their speeding habits through real-time warnings, the manager reporting is a good way to identify these drivers and use other tactics to persuade them to change.  For instance, you can provide incentives or penalties, give them shorter routes, or even remove them altogether from your driver population.  The key is now you know who to focus on.

In summary, by being sure that all purchases and miles driven are legitimate,  tracking fuel purchase,y being sure vehicles are well maintained, and by using technology to be sure drivers are driving in a fashion that will not cause excessive fuel waste, the fleet is taking strong steps in minimizing fuel-driven drain on the bottom line and effectively reducing fleet fuel costs.

You can find out more about which cookies we are using or switch them off in settings.

This website uses cookies so that we can provide you with the best user experience possible. Cookie information is stored in your browser and performs functions such as recognising you when you return to our website and helping our team to understand which sections of the website you find most interesting and useful.

Strictly Necessary Cookie should be enabled at all times so that we can save your preferences for cookie settings.

If you disable this cookie, we will not be able to save your preferences. This means that every time you visit this website you will need to enable or disable cookies again.